QIMA figures show in 2011 51% of food inspections conducted in Mainland China failed. While the majority of these inspections were failed because of minor defects, 10% were for critical defects with an extreme case involving contamination by a large quantity of rodent fecal matter. The fact that over half of all Chinese food inspections fail is even more alarming when compared to an average failure rate for non-food products of about 30%.

Evidence of this overwhelming deficit in food safety is supported by government figures. According to China's State Administration for Industry and Commerce, in 2011 62,000 illegal food cases were reported. Additionally, authorities stopped the operation of 43,000 unlicensed food-producing businesses found to be operating illegally and revoked the business licenses of 576 operators during the same period.

Food safety is not limited to only the food itself. Food packaging, with a 2011 inspection failure rate of 57% is just as critical. "Food packaging defects may not seem critical", says Sebastien Breteau, CEO of QIMA. "But by the time food leaves the factory and hits store shelves, toxic amounts of contaminants like formaldehyde and lead can leech out of packaging, contaminate food and cause serious harm to consumers."

According to FERA, the United Kingdom's governing food and environment agency, common chemical contaminants like the infamous melamine often come from food cans and lids or from plastic food containers. Melamine - responsible for the infamous 2008 Sanlu milk scandal sickening over 300,000 - has been found at high levels in canned dog food shipments as recently as January 2011. 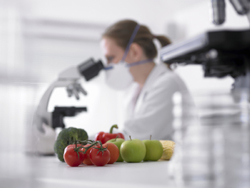 Chinese milk is back in the news as well, as this December China's largest dairy company, Mengniu, destroyed a batch of milk contaminated with Aflatoxin, a substance commonly found in mildewed animal feed that can cause liver cancer. The chemical was found during a random spot check by the Chinese governing body AQSIQ. Only 10% of the batches contained the deadly chemical, meaning it was only by a slim chance that a random spot check found the defect before the product reached consumers.

Like melamine, other chemicals that are banned by the Chinese government due to deadly effects are still routinely found in shipments of food products. According to Food and Water Watch, one such substance, clembuterol - which is toxic to humans - is administered to animals to give them leaner meat and pinker skin.

"China exported over 4.5 billion tons of food in 2011 alone," says Mr. Antoine Bloch, AsiaPacific Vice President of Silliker - a partner of AsiaFoodInspection with QIMA. "With chemical and natural contaminants threatening food available to all of us, the need for prevention in the form of comprehensive laboratory testing has never been clearer."

About QIMA - Your Eyes in the Supply Chain!™