View the barometer on slideshare


QIMA data for Q3 2016 in China shows increased audit and inspection demand, at +12.6% compared to Q3 2015, consistent with the economic rebound China has displayed recently. Indeed, latest manufacturing PMI data for September shows a sustained growth at 50.4.i

Despite some of this growth being attributed to government policy support, the increase in consumer spending is an equally important factor. ii As QIMA saw demand for inspections and testing from local brands and companies rise by +8% YoY, China retail sales climbed 10.6% in August, picking up from July's 10.2%.


Pressure on China's Exports from Neighboring Countries Varies per Industry


China's foreign trade shows signs of rebound as well: September's Exports PMI data indicates an increase in new export orders for the first time since April. iii However it is clear China's exports are still under pressure from other Asian manufacturing powerhouses as recent QIMA figures show that India, Indonesia or Thailand all outperform China for inspections and audits year-to-date growth (with respective growths of +80%, +40% and +14%). EURATEX researchiv shows that the increasing pressure from SAARC and ASEAN countries is responsible for the decline of China's market share in the EU imports of clothing and textile, while Chinese footwear manufacturers perceive Vietnam as one of the biggest threats for their US exports.v Their fears may not be baseless, indicates latest QIMA data, as Vietnam's footwear inspections increased by 49% year-over-year.

While this may be the case, China is set to maintain its leadership in other industries: QIMA figures show a strong upward trend in demand for China inspections for such segments as Electrical and Electronic items (+18% in 2016 year-to-date) and especially Printing and Packaging, where product inspections surged by 48%. 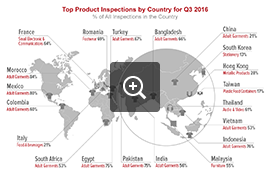 
So far in 2016, QIMA figures show a significant jump in E&E product inspections across Asia, with an increase of +19% year over year – evidencing the concern electronics brands and retailers have over their products' quality and safety. As a matter of fact, consumer safety issues in this product category are still frequent, the most recent of them being the massive recall of 2.5 million Samsung smartphones, after numerous reports of fires, injuries and explosions caused by overheating batteries.vi The recall, estimated to cost the company $1bn, affects Europe, the US, Australia, and South Korea.

Meanwhile, lead and phthalates continue making the headlines in the US, evidencing the need for better chemical controls in consumer products. In the past quarter alone, lead concerns resulted in the recall of water bottles,vii toys,viii costume jewelry,ix and even cooking spices.x Results for phthalates testing also give cause for concern: some 8.6% of products tested by QIMA in 2016 failed under Prop 65. Phthalates content remains an issue, as chemical research keeps finding new and unexpected sources of phthalates in household products. Just this quarter, an American NGO discovered these chemicals in the garden products of major retailers. Garden hoses present a particular risk, as phthalates present in those can seep directly into water, says the Chemical Watch report.xi


Bangladesh: The Acute Need for Safety Goes Beyond RMG


Meanwhile, the painful struggle for better factory safety continues in RMG powerhouses throughout Asia. QIMA's recent structural audit data shows that structural risks remain high in Vietnam, with 52.1% of audits showing factories at Major or Critical risk, closely followed by China (51.9%) and India (51.1%). Major risks have also been identified in Indonesia and Pakistan – but the one country that took a real hit last quarter was Bangladesh.

The recent fire at the Tampaco packaging factory, the country's worst industrial disaster since Rana Plaza,xii emphasized the need to expand current safety initiatives. The two major safety bodies – the Bangladesh Accord on Fire and Building Safety and the Alliance for Bangladesh Worker Safety – only cover the Bangladeshi RMG sector, while safety problems prevail in all industries.xiii

"Structural safety best practice is quickly becoming a focus for industries operating globally", said Sebastien Breteau, QIMA CEO. "Our audits continue to uncover serious risks throughout the supply chain, pointing to a major gap between government policy and business practice. This is why we're keen to work with our clients to raise awareness of new structural safety frameworks, and improve workers' conditions across the board."

With both the Alliance and the Accord set to cease operations in 2018, an agreement was reached recently to establish a new body to oversee structural safety in the RMG sector from 2018 onward.xiv The proposed Remediation Coordination Cell would be implemented under the ILO's "Improved Working Condition in the RMG Sector" program, and take over the responsibilities of the Accord and the Alliance.


Their economic importance notwithstanding, textile and apparel are China's top polluting and water-intensive industries, and may face major challenges as the country's ongoing pollution reform unfolds. Latest QIMA audit results show that waste management and effluent treatment at textile facilities remain below par: over the last 12 months, 73.9% of textile factories in China were classed as "Major Risk" in this category and 26% as "Critical Risk". These figures are higher than the industry average found by AI, with 63% factories at major risk, and 19.8% at critical.

There can be no argument that pollution is a drastic issue in China, as ground water quality continues worsening for the fifth consecutive year,xv while air pollution regularly mires Beijing in smog.xvi Some of the new anti-pollution measures being developed are quite drastic: for example, implementation of the "Water Ten Plan" released earlier this year would put over 90% of textile factories at risk of closure.


Food Safety Back in the Spotlight


Food safety also returned to the spotlight this September, as 1,000 tons of tainted meat worth $12.3 million was seized in Guangdong.xvii The meat was smuggled into China, some of it soaked in bleach to increase its weight. This year's biggest food-related scandal so far shows that despite the stricter punishments under the new Food Safety Law implemented in October 2015, food safety remains a top concern for China. Nevertheless, QIMA data shows that global food players are still on their way to improve the compliance of their supply chain, judging from the increased food inspection volumes in China: + 17% YoY, and over +32% quarter-over-quarter.

xv. Today's Fight For the Future of Fashion
http://chinawaterrisk.org/wp-content/uploads/2016/08/China-Water-Risk-Brief-Todays-Fight-for-the-Future-for-the-Future-17082016-FINAL.pdf

xvii. 1,000 Tons of Tainted Meat Seized in South China Including Some 'Soaked in Bleach'
http://time.com/4498998/china-meat-food-safety-bleach-police-guandong-shenzhen/