View the barometer on slideshare 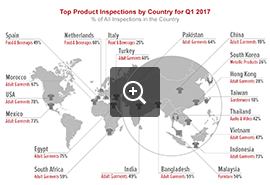 
QIMA's Q1 figures for inspection and audit demand are a reflection of the sourcing trends that will continue shaping global trade throughout the rest of 2017. China's inspection volumes rose by +16% YoY in Q1 2017, so far outpacing the growth rate of 6.5% projected for 2017 by the IMF.i In the rest of Asia, first-quarter growth has been typically sluggish, with the notable exception of Taiwan, Malaysia, and Vietnam where inspection volumes rose this quarter by +20%, 10% and 5% YoY, respectively.

Meanwhile, outside of Asia, the South African region has reaffirmed its position as an increasingly prominent Textile sourcing hub, with a +23.5% YoY growth in Q1 2017.


The first quarter of 2017 has proven challenging for ethical compliance, as QIMA data saw the percentage of "Red," or critically non-compliant factories rise to 30% (vs. 27% throughout 2016). The rest of the audit findings were fairly evenly split between compliant ("Green") factories and those in need of improvement ("Amber"), with the latter taking slight prevalence. Working hours and wages was the criterion with the most violations: factories scored an average of 7.1 out of 10 in this category, compared to the overall average score of 7.9 out of 10.

Ethical performance and trends were disparate by region as well as by industry. Suppliers in Southeast Asia received scores around 8.8, while factories in South Asia were rated 8.5 on social compliance (both regions improved by 8-10 percentage points in Q1 2017 compared to 2016). In the meantime, factories in Southern China scored 11% better than their Northern China counterparts (7.9 vs. 7.1, respectively).

The best-performing industries in Q1 2017 were Food Containers and Bodycare, where factories had average audit scores of 8. Ethical compliance of toy manufacturers, on the other hand, decreased this quarter, scores slipping 8 percentage points (from 8.1 in 2016 to 7.3 in 2017 YTD), with Health & Safety violations being the most common issue. Similar performance was observed among E&E factories and the makers of construction products.

Structural safety overall continues to deteriorate, as QIMA data for Q1 2017 shows the percentage of compliant factories dropping to 30.5% (vs. 37% in 2016 and 41% in 2015). Over 69% of factories were found in need of remediation, including 4% with critical safety risks in the short and medium term.


The first quarter of 2017 failed to show improvement on consumer goods quality compared to 2016, as QIMA data shows inspection failure rates still hovering around the 33% mark.

China's manufacturing quality continues its long-term trend towards gradual improvement, with failure rates for product inspections settling at 30%, a few percentage points below the global average. Across South Asia, well over half of onsite inspections found more defects than allowed, with Bangladesh and India as the unfortunate leaders of this statistic (at 61.7% and 55.3% respectively), and Indonesia and Pakistan not far behind. By contrast, Turkish manufacturers made strides in product quality in the past quarter, pushing the percentage of inspection failure rates below 20% for the first time in the past two years.

The textile industry remains the worst offender for poor quality, with 41.7% of products falling short of the target specifications. In contrast with that, the percentage of failed inspections in the Accessories sector slumped to 21.3% (a 3-point drop compared to late 2016). Eyewear products, being the largest contributor to the Accessories category, showed even more tangible improvement: some 15% of inspected products were rejected in Q1, compared to the previous year's 19%.

Product quality for the Toys and Juvenile Products industry saw no significant change in Q1 2017, rejection rates remaining around 30%. In the E&E industry, despite a slight drop in the percentage of failed inspections (23.4% in Q1 2017 vs. 27.8% in Q4 2016), safety recalls were rampant: from large home appliances at risk of explosion, to faulty laptop batteries of multiple leading brands. The infamous hoverboards continue making headlines, as the latest fire caused by a malfunctioning li-ion battery has resulted in two fatalities, prompting a massive product safety investigation and recall in the US.

Test data from QIMA labs shows that consumer hardgoods' manufacturers are still struggling with chemical compliance, especially when it comes to lead and phthalates. These substances remain a particular problem for all types of juvenile products, including toys and childcare articles, and food contact items.

Among the products intended for the US market during the first quarter of 2017, unacceptable amounts of lead were found in 8% of children's products, 11% of all toys tested contained banned phthalates, and 8% of food contact items failed the FDA's chemical requirements. Meanwhile, exporters to the EU fared not much better: over 5% of products tested failed the REACH requirements (a two-fold increase compared to 2016) because they contained unacceptable levels of chemicals restricted or banned from the EU market.

"Product quality and safety remain a challenge for brands and retailers worldwide," said Sebastien Breteau, the CEO of QIMA. "Evolving safety regulations on multiple levels, combined with the increased consumer and media awareness, make it difficult even for established brands to continuously ensure compliance in an ever more global market."